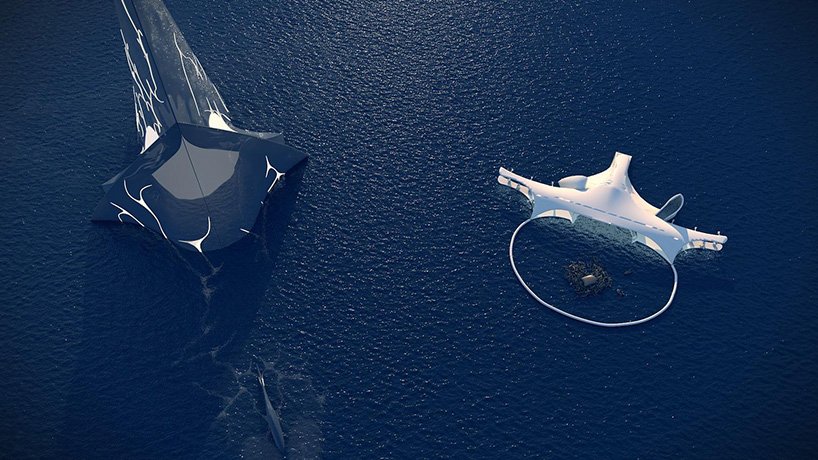 Lucy Zakharova and Ted Lu have revealed their project ‘en·cap·su·lat·ing’, proposing a constellation of 5 capsules built from the refuse of the pacific ocean garbage patch. The capsules will be deployed at different depths of the ocean in order to clean and restore the aquatic ecosystem, mitigate the ocean pollution crisis, and radically reconfigure human interaction with the ocean and its species.

According to Lucy Zakharova and Ted Lu’s research, over the years, human activity has created a negative impact on the marine ecosystem, polluting and destroying it. Due to the extreme amounts of plastic that have leaked into the oceans, garbage patches have been created, expanding enormously and causing major damage to aquatic life and ecosystems. The changing wind and direction of global ocean currents cause these ‘islands’ made out of plastic to migrate within the aquatic environment, harming the different species. Sea turtles think that the plastic is jellyfish and eat it, while other animals can entangle in the plastic and eventually drown. Algae is not growing as it should and the entire food chain is being affected negatively, including humans. Together, the garbage patches harm the ocean, the marine inhabitants, and also our coasts.

The project suggests a non-static infrastructure built out of plastic refuse, moving cyclically through a dynamic and ever-changing pacific ocean. A cluster of vessels in international waters that work together in order to benefit not only humans but also other species that are important to this environment. The goal is to detoxify the ocean by reconfiguring plastic pollution while promoting knowledge of the oceans and teaching the public their duty to protect natural heritage. Therefore, a major part of the proposal is being dedicated to research labs, and data collecting centers. The deep-sea, with the change of temperature, pressure, and salinity of the water it is known to be occupied by different living organisms, generating potential zones for investigation dedicated towards oceanic research and education.

Other parts of the program would be dedicated towards preserving endangered marine species and their ecosystems. A variety of known living organisms face extinction due to the simple inability to adapt to the new climatic conditions in their living environment, therefore their lives are highly endangered. Environmental preservation centers would be independent and would focus on animals and vegetal species as the main priority while allowing a program mixture with research investigation. Although we are encapsulating now to resolve the issues that humans have created, one day we will be decapsulating, then we can eliminate the barriers between all living species.